So you like big flashy numbers and blowing things up eh? Well today i'll show you a little about WWS from the perspective of DPS. I'll use rogues specifically (since that is what I play as my main after all) but the things I'm going to show can be applied to any class. I'm going to give you some fundamental rules of DPS, and while WWS won't always tell you if you are breaking these rules, it will give you an idea if you look through it, on how to improve or maximize some of these rules.

Now first off I'm going to mention that WWS isn't a tool that you can use to compare yourself directly to someone else and say "so and so is better then me" or "look im 15% better then this person", what we want to gain from the report is area's for self improvement, ask yourself "How can I squeeze out another 100dps? or another 1000 dps?".

Each fight is different for each class, and some fights suffer more for having movement in them, some bosses can silence, etc. When looking at a WWS report you have to understand the mechanics of the fight as well as the data you are looking at. The number one rule you have to remember here is "Dead DPS do no DPS". If your more focused on the flashy numbers then you are that fire you're standing in, then you aren't doing your raid group any good at all.

Shy and Thror have all ready talked about navigating WWS so I'm going to assume you've read their posts here and here. Here is a sample Patchwerk Kill on 25 man. I choose a patchwerk kill to show you because it eliminates movement from the equation and for the most part you don't have to worry about being threat capped. 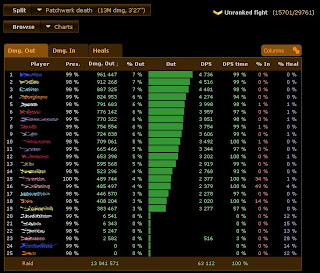 You can see from this I've blurred the names but you can still see that dps varies, and the rogues are in positions 2, 14, and 19 when sorted by dps. From this screen we can see how the rogues did in comparison to the rest of the raid, thought we are more interested in how they did it. So if you go to Browse -> Raids & Mobs -> 3 Rogues you will see the class summary page shown below. 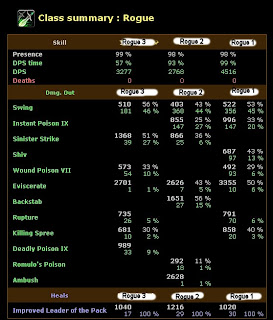 Ive removed the names but Rogue 1 was #2, Rogue 2 was #14 and Rogue 3 was #19 from the initial dps stack in the first screenshot. Here the first thing that we can notice is that all the rogues were present for the fight, and none of them died during it, but Rogue 3 only has a 57% DPS time, which accounts for his lower over-all damage even though his DPS is higher. The DPS time measure how much of the fight you are actively attacking, where presence just means that you are there.

Now im going to ignore the DPS time for the rest of my explanation and show you things to look for where you can improve, so continuing down the class summary page you can see the types of attacks each rogue made, and from that you can infer their spec. Rogue 3 used sinister strike as their main combo-point generator, Rogue 1 used Shiv to generate combat points (no longer viable as of patch 3.1 so don't try) and Rogue 2 used a combination of backstab and sinister strike.

The White numbers on this page are the Average Damage and Crit% of each of the attacks, where as the green numbers represent the # of hits, and %damage that the skill did for your overall damage.

If your looking for improvement and you can see other members of your class using a different rotation then you, take the time to ask them why (you are raiding with friends and guildies right? I'm sure their willing to help you!). Without going into the mechanics of why I well tell you that typically a rogue will always want to use rupture on a boss fight, and also always use deadly poison on their offhand weapon. (Rogue one in this case in an exception to the rule, using a spec that is no longer viable, and would also use deadly poison now as well)

Now continuing on, you can look at the individual pages for each rogue going
Browse -> Raid & Mobs -> 3 Rogues -> Rogue Name 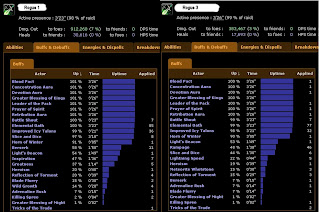 This screen will show you what buffs you had up, and what percentage of uptime they had. This screen can be important for seeing how often your trinkets proc, and for checking if you made use of all your available cooldowns. In this side-by-side you can see both rogues have bladefurry and killing spree. Both are on a two minute cooldown, and from the first page we know that the patchwerk fight took 3 minutes and 27 seconds. Bringing my to my next rule.

The final screen im going to show you is the Energies and Debuffs screen. 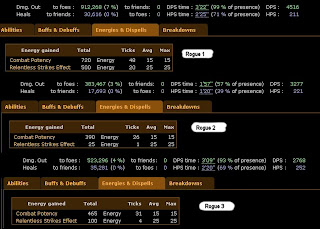 Ive edited this screen to show you all three rogues at once, though normally you'd have to view this individually. What this shows you is that all three rogues have combat potency and relentless strikes (two skills that give you more energy and therefor let you do more damage). What you can also see here is that rogue 1 gained more energy through both skills then the other two rogues, and while im not going to explain why that is, I will tell you that it has to do with skill rotation and the way the rogue is spec'd. For improvement ask yourself, "How did they get in more attacks, regain so much energy, etc". Inspect those you raid with, see if there are difference in your spec, or glyphs. If you see someone of your class doing more damage and you'd like to know how, ask them! Most people are more then willing to share that information with you. Which brings me to my final rule.

What I want you to take away from all this is that while WWS is a comparison tool and can allow you to see how you're doing compared to the others that you raid with, nothing will improve your DPS more then asking questions and communicating with other members of your class.