Why Does Blizzard Hate Healers?

I was going through my reader and came accross Larisa's post about Ghostcrawler blogging about healers. Naturally I ended up reading GCs blog post and I wanted to post a reaction. I had erased my comment about 10 times already when I realized that I might just need a bit more space than the tiny white box they give you to comment, so I figured I would just post a reacion on my own blog instead.
Ghostcrawler speaks about having to restrain resources. Mana was according to him (and a lot of players) a non issue in Wrath and this had to change to make healing more fun again. He also speaks about wanting to make the healing more challenging and not the 'boring faceroll' it is today.

I have to be honest....if you feel healing is a boring faceroll in the current environment I think it can only be due to two things:

1. You're done with the content.
Your gear is of such a level that you're simply done with that content. No healing system in the world should change this, at some point you have to get the feeling that you're growing, that you've mastered certain content, and that you're the hero being able to beat the villain. If they would take this away, the whole hero feeling...well, I might just have to find another game to play. I play this game to win, I love challenges, and if I'm not ready for a certain villain, I can accept that. But if I am ready, and if I beat that villain many times over I want to indeed feel heroic and have an easy time with him eventually.

Because your raid apparently felt they had to bring in more healers so that the raid would be succesfull. And if this wasn't the case then why didn't some of you switch to dps to make things go faster? You could decide to go for the challenge, but you didn't. You decided to take the easy road instead, you decided that you preferred facerolling.

My group is the number 3 casual 10man, and the number 6 on 10man achievements on the server according to guildox. And we have a competitive realm. Where 7 guilds have finished LK10 heroic and 2 have done LK25 heroic. Not top of the world, but certainly not too shabby either. I think I can safely say that I know what I'm doing when it comes to heals.

And I have never felt, at any point of this expansion, that I could faceroll content that was appropriate for my gear and experience level. The only reasons that I can faceroll content is when we bring more healers, or when we go back to older content.

My 10man raid team has been doing the 10man ToGC for the past few weeks and we run it with 2 healers normally. While we have all gotten a frostbrood dragon we still didn't manage to get an argent pony every week.

So if you think you're a good healer and you're doing gear and experience appropriate content, and still you can faceroll through content? I simply don't believe it.

You probably think by now "What the hell is she doing, randomly insulting people...does she also have a point?"

Actually, yes I do.

According to GC, healers are more fun when they are struggling over resources. And when they talk about resources everybody immediately focuses on mana. A large part of the commenting audience agrees and cries that Wrath has made the state of healing too easy.

My problem with this is that it's not the only resource a healer has to deal with. Healers deal with quite a list of resources even:
- Time
- Target's health
- Own health
- Location
- Cooldowns
- Knowledge of the fight
- And coming up, moreso than before, mana.

I honestly feel that this last resource restraint wasn't needed as much as it's currently implemented. I also don't believe that the amount mana restricts healing currently will make it more fun for healers. Challenges are only fun when things are just out of your reach, but you can succeed when you strain yourself and put in an effort.

Climbing a hill top with an average physical condition is fun, and reaching the top is rewarding you with a great view. Climbing Mount Everest is not something I would recommend though.

And I think a lot of healers who are now crying so loudly that they need more challenge, will be some of the first to cry when they find out exactly how difficult and straining things have been made in Cata.

I also believe that a lot of healers simply won't survive and they'll droop back to being dps. Hell, I've been poking around Cata since alpha and I've been ready to throw in the towel several times. And believe you me, I'm a healer, through and through.

Consequences? Less healers available, PVP will be horrific for healers (and hey Dawn Moore and I finally agree on something), and those who stick with it, will be praying for the burden to become less heavy. 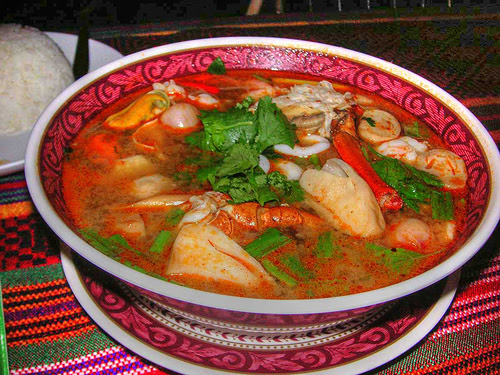 Do I believe that Blizzard is intentionally setting healers up to fail? No, of course not. I believe that most of the  Blizzard designers love this game every bit as much as we, the players, do. I also believe that they do this with the best intentions possible.

The players cry out in unhappiness with the current state of the game, so Blizzard had to change some things.

I simply think they made the scale tip in the other direction.

If healing is compared to a good soup, and Blizzard is the chef...In Cata they added a Red Savina Habanero spice instead of a bit more salt and pepper. And food that hot is an acquired taste.
By Vanessa at 10:06 AM