A few weeks ago already I have stopped raiding, maybe for now, maybe for ever. But I will definitely stop blogging.

The game just doesn't do it for me anymore. During Cataclysm the annoyances came and those annoyances kept coming until eventually they just outweighed the good.

I now haven't raided for a few weeks, and while I miss my friends, I love the freedom that I have during my weekends now. I love being able to sleep in as well. I hadn't done that in ...oh...about 5 years.

In fact, I woke up yesterday morning at 9:10 am in the morning! It has been a looong time since that happened.

If I do continue I'll post the address here (for those few that would want to follow me anyways), but other than that no more posts will be posted here.

Thank you all for reading and commenting and I wish you all the best. 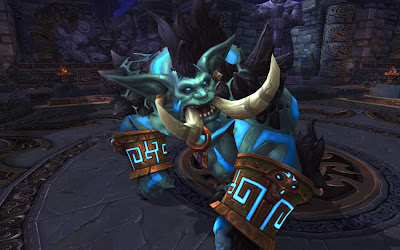 Much has happened since my last post here...amongst other things, Furious Pantaloons has had a guild split.

Sad, but in the end unavoidable I think. I wish the group that split off the best of luck, and hope that they will be happier within their new guild than they eventually were in FP.

We beat this 3rd encounter of the new Throne of Thunder raid this last weekend using one of the more unusual tactics we have used in raid encounters so far. In fact, the unusual part was that we ignored just about every normal tactic.

We had tried this for 12 attempts, starting to think already that we should let the information sink in and come back next week, when someone suggested that we could try to just group everything up and aoe all of it down.

This, normally, would never be an accepted tactics. Blizzard generally makes sure that there is one or the other something going on that prevents you from doing this. And in fact, this is totally not how this encounter is meant to happen, but lo and behold....3 attempts later, the Council of Elders was dead.

What you do need to know before attempting this.

One tank on Sul, One tank on Priestess, tanks have to swap the frost dude between them, Malakk.

First boss to empower is Malakk. When he is empowered he casts Frostbite. This ability forces 2 people (4 in 25s) to stack on the person with Frostbite to reduce the stacks to one.

This still has to happen!

Other than that, make sure that if you cleave off something you cleave of Sul. You want him dead first since his sandstorm ability is a pain.

Lastly, make sure to kill the Shadowed Loa Spirits that are cast by Mar'Li while she is empowered. They will kill the person they are targeting if they reach that person.

Heal the crap out of everybody, muchos aoe heals, and aoe dps everything.

Your dps will be much higher this way, which is also what will allow you to do this.

Our logs for that evening.

Attempt 13, 14, and the winning attempt followed the group'em up strategy, the rest is following normal tactics.

We then went on to have a look at Tortos..but he kicked our ass. Guess next week we'll be kicking some turtle ass!

Good luck if you attempt to use this strategy :)
By Vanessa at 1:48 PM 7 comments:


This is from the patch notes.

So if I translate this:

I like the theory, but have never been able to do what Blizz is saying here. What I have seen is that I'm not capable of doing half the dps a normal dps is doing, mostly due to mana issues, because in short fights I do see the numbers sometimes. But I have also never seen myself do half the hps I can do without the fistweaving.

For what it's worth

1. With 10 people you normally have a tighter group.
You know each other better, and you have to trust more on each other to do the job. In 25s you always get sub groups. This is not even my experience only, there has actually been research into this stuff and once a group gets to big, it will automatically split into smaller groups.

2. I find deafeating a boss with less people a lot more epic.
Think about it...I defeated all those big dragons and baddies with only 10 people, other groups needed 25. Bah weakos, had to pull in all their friends to be able to beat da boss.

3. With only 10 people there are less spell effects and I actually get to see more of the fight.
When I ran 25s I saw very little of the fight itself, the spell effects were overwhelming. I get this with LFR already and there you don't even have to focus much.

5. Healing is a lot more intense in a 10man raid.
With 25 people you have 5 or 6 healers covering the raid. You have a certain role, you do your role and you don't often move away from doing your role. In 10s you sort of have to be able to do everything. In current content the only boss we have somewhat strict healing divide on is Garalon, and even there we have to keep an eye on all targets and not just on the ones our focus is on.

6. Organization is less intense in 10s.
What can I say I am a control freak...or wait, think positive...a natural leader. When I see a situation that needs organization and structure I tend to step forward and take over. Not in a mean way, but it naturally happens often. I know what I'm doing and when there is not a strong lead in a group I take over.

This leads to me always leading something in a 25. In our 10s people lead themselves. I do some organizational stuff, like copy/paste the calendar invite, but the rest gets itself arranged.

I do have to say that I am incredibly lucky with the base of our 10man group. We've had people rotating in and out, but the base group is strong and stable, for which I am very thankful.

There you go, six strong reasons for me to like 10s better. So the fact that Blizzard feels that 10s are worth less than 25s, is to me another disappointment to the game.

Bit of a shame...I was discussing with Thror yesterday. And while this whole loot change is on its own not even all that big of a deal. MoP has few things in it that not have a bad aftertaste for me.

I hated Cataclysm with a passion, but I play less during MoP...but hey, that might just be the next blog post.

10s aren't more popular because the entire community agreed they're more fun, it's just a simple case of effort versus reward.

In one sentence this person just called everybody who does 10s lazy and greedy.

Tons of players would love to do 25s, but the coordination and effort to do so is more difficult with very little additional reward.

This was the sentence before that.

Tons of players....obviously not tons of leaders, because otherwise there would be more 25s than 10s. And if those leader's are sick of dealing with the extra organizational hazzle, why does it make sense to offer the entire raid a higher chance for higher item level loot?

I see what Blizz is trying to do, but the sort of nonsense they are trying to do now with the thunderforge loot only pisses people off.

Add to that these sort of explanations of why what they're doing is a good thing to do, and you'll piss even more people off. Smart move Blizz.
By Vanessa at 7:28 PM 4 comments: