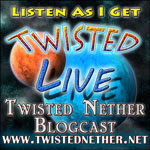 I was poked a couple of weeks ago by Nibuca from the Twisted Nether Blogcast with the question if I wanted to do a host appearance on their show. I was stumped to be honest. It's been a while since I checked the statcounter and apparently I've managed to pick up a fairly large group of readers, and I've not even been around for a year!

So I started wondering if this would be because of my sarcasm, my criticism sometimes, or maybe I have hidden talents that I don't know about just yet.

I do know that I'm honored to have been asked, and think that all of you out there, yes you too, you should be listening this Friday! (I have no idea what we'll be talking about, but I'm sure it will be fun :))

Edit: Canceled due to timezone confusions. My Friday morning is not your Friday evening and woah so their Friday evening means it's fully during my 10man ICC and woops what to do now, well...we're going to reschedule! So, yes, I will still be there, just not the 26th :)
By Vanessa at 12:53 PM